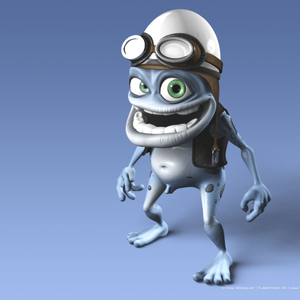 Crazy Frog is a character used in the marketing of a ring tone based on The Weird Annoying Thing, a computer animation created by Erik Wernquist. Marketed by the ringtone provider Jamba!, the animation was originally created to accompany a sound effect produced by Daniel Malmedahl while attempting to imitate the sound of a two-stroke moped engine. The Crazy Frog spawned a worldwide hit single with a remix of Axel F, which reached the number one spot in the United Kingdom, Turkey, New Zealand, Australia and most of Europe. Read more on Last.fm